Get out and explore

If Chicago Basin isn’t on your bucket list, it needs to be.  Even if you don’t climb mountains, this place is worth a visit.

The trip starts with an iconic train ride out of either Durango or Silverton and takes you into the heart of the Weminuche Wilderness, where it drops you off to fend for yourself. Time to explore!

The hike into Chicago Basin is roughly 5 miles and 2,000 vertical feet, so its no walk in the park. The well maintained trail follows the Needle Creek drainage offering views of nearby 13,000 foot mountains towering over you.

This basin is one of the more visited places in the Weminuche.  There were 30 people piling off the train plus our group of 5. Even though there are large groups of people, the basin is so expansive that most likely you’ll only run into a few people during your stay.

Rob, Matt, Kyle, Boden and myself had been looking forward to this trip for several months and finally pulled the trigger and bought our train passes for labor day weekend.  This was my first major backpacking trip and therefore I over packed BIG time. I wasn’t the only one in the group that made that mistake, so life was good hearing other people struggle and complain on our way into the basin (misery loves company, right?)..  The trail is traveled by horses and pack mules so watch your step :).

There is no other way to put it, this place is pure paradise. 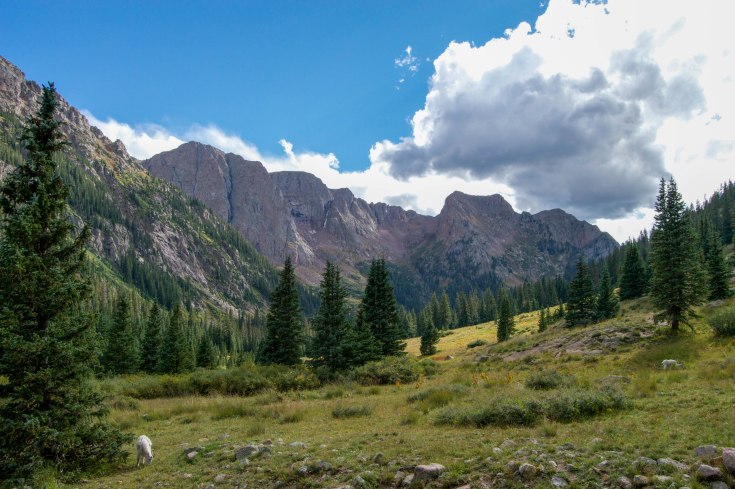 We boarded the train on Friday morning in Durango and consumed some orange juice and beer (try it, it’s delicious) en route to the Needleton drop off.  The train ride is pretty epic and deserves a spot on your bucket list even without a trip to the basin.  We unloaded at the Needleton drop off, loaded up our packs and made moves towards Chi-Town basin.

Enter “The Basin”… Rob found us a sweet camping spot that we called home for the next few days.  We headed to the creek which was a short trek from camp and filtered water and filled our reservoirs.  Dinner was made, laughs were had and soon after the sun had set, everyone was cozying up into their sleeping bags for a 4am start time.

Getting out of your sleeping bag after a not so great nights sleep, when it’s cold and dark out, is not fun. Period. But, the pull of the mountain is a strong one and before you know it you’re up getting your gear ready and waking up your snoring buddies.  I’ve found that 4-hour energy shots make the morning transition much, much easier and offer a slight energy boost through-out the day.

We timed our trip almost perfectly as the moon was near its “new” moon phase and therefore the stars were shinning bright with no other light in the sky to compete with.  I will always remember the early morning hike up to Twin Lakes and looking back down the trail only to see a few headlamps tracking back and forth across the trial and the vast night sky shinning bright all around me.

Sunlight Peak was the first mountain on our list and once we arrived at Twin Lakes we headed right on the trail, switch backing up into the upper basin connecting Windom and Sunlight. The hike up Sunlight is a demanding one and due to its technical difficulty should be researched fully before embarking on. There are a few class 3 maneuvers over stable rock that spice up the climb and make things interesting. The final move onto the summit block is an airy and awkward class 4 move, but with the right hand and feet placement isn’t too difficult.

Windom Peak was next. We headed back down from Sunlight Peak to the Sunlight/Windom basin.  Scramble over class 2 rock en route to Windom’s south west ridge. The ridge is a fun class 2-3 climb full of boulders to navigate and climb over with the exposure increasing as you near the summit. The summit offers unbeatable views of the greatest range in Colorado, the San Juan’s.

We had originally planned on trying to complete all four 14ers in a day, but after hiking back down to Twin Lakes decided that we were all exhausted and called it a day.  Getting all four in is definitely do-able though.  Just plan to start early, keep an eye on the weather, and bring plenty of food and water.

Time to relax and recover.  The train wouldn’t be back at Needleton until after 2 pm so we had some time to lounge around before making the trip back.

Waking up in the mountains and watching the sun rise with a warm cup of coffee might just be my favorite thing in the world.  The cold morning air battles with the light breaking over the tops of the mountain, spilling into the basin below and warming the earth, as well as my bones.  We ate breakfast on a rock in the middle of a meadow and watched the sun rise, reflecting on the previous day and our accomplishments.

Once back to Needleton we grabbed some beers that we had previously stashed in the river (this is KEY after a long weekend).  Rob was also a pretty smart dude and had brought a frisbee with him, so we had some entertainment while waiting for the train.

The train arrived and we loaded on. Finally able to sit and relax on a padded chair was heaven.  The train has a full service bar with snacks and hot dogs which helped soothe our minds and bodies.  A couple bloody Mary’s later and we were content, bouncing back towards Durango and civilization.

This trip was a game changer for me and one that I will not soon forget.